The Role of an Electric Switchboard in Power Flow 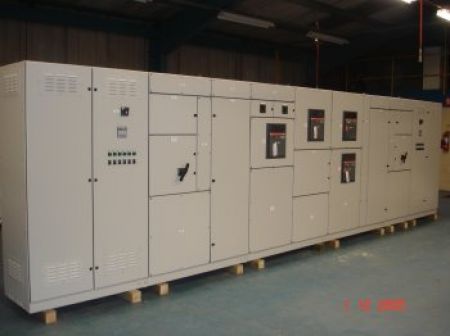 Electrical power systems work as power is sent from the utility provider which then in line moves through an electric switchboard. That switchboards then relays the electricity throughout a number of circuits. The power is then moved to feeders and then distributed to locations throughout the reach of the power grid.

An electric switchboard is an electrical device that distributes electricity from one electrical source to another electrical source. It is a major component used in power distribution process. It is made up of several electric panels. Each electric panel contains switches that redirect electricity. An electrical switchboard is a single large panel or can be a combination of electrical panels on which switches and other power control equipment are mounted. The main purpose of the board is to control the flow of power. It divides the main current supplied to it into several smaller chunks and distributes it to the devices. In precise, switchboards supply power to transformers, panels, and other equipment and from there power further gets distributed.

An electrical switchboard gets power supply from a power generator or any other major power source. The operator working on controlling a board must be protected from electrocution. This is provided by fuses and switches mounted on the board. The amount of power received by switchboards must be equal to the amount of power distributed by them. There are controls which monitor this power distribution process. There are several load sharing controls, plus gauges mounted on the board to control power supply.

There are several types of electric switchboards based on current rating, construction type, interrupt rating, operating type, voltage type, insulation medium, and others. Inner part of the board contains several busbars, strips of aluminum and copper to which switches are connected. The main purpose of electric switchboards is to supply power to each and every single recipient electrical device. The amount of current should depend on the amount of power used by the device to function properly. The electrical board receives power from a major power source like generator and then gets distributed to each of the electrical devices or appliances used by the consumer.

Electrical Supply to the Board

When a particular device is connected but not in use then, only minimum amount of power should be supplied to that device. Electrical supply to the board should be turned off when it is opened for maintenance. It prevents the operator working on the board from getting electrocuted. The main source of power supply inside switchboards are bare busbars. So, if an individual has to work on switchboards that are live then proper precautions must be taken before working on it. One must use protective gloves, glasses, shoes, rubber mats when working on live electrical switchboard.