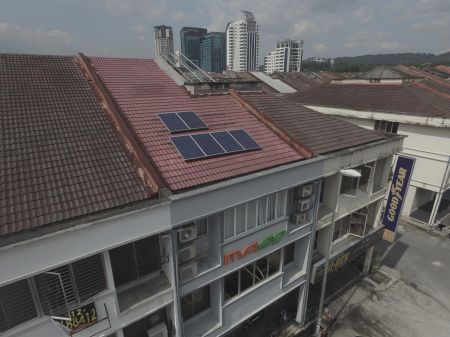 Researchers are one step closer to developing a new generation of low-cost, high-efficiency solar cells. The structure is one of the world’s first examples of a tri-layer metasurface absorber using a carbon interlayer.

Researchers from the Universities of Bristol and Exeter are one step closer to developing a new generation of low-cost, high-efficiency solar cells. The structure is one of the world's first examples of a tri-layer metasurface absorber using a carbon interlayer. The system, developed by Chenglong Wang a PhD student in Professor Martin Cryan's research group, uses amorphous carbon as an inter-layer between thin gold films with the upper film patterned with a 2D periodic array using focused ion beam etching. The trilayer gold-carbon-gold metasurface strongly absorbs light across the solar spectrum but minimises emission of thermal radiation from the structure. The use of gold in the research is a first step towards a high temperature metasurface where gold can be replaced by other refractory metals such as tungsten or chrome. The cell will be used for solar thermal energy applications and has the potential to reach much higher temperatures than simple black surfaces because it can minimise the emission of thermal radiation. The metasurface has been developed as part of a joint project, led by Dr Neil Fox, between Bristol's Department of Electrical and Electronic Engineering and Schools of Physics and Chemistry. The aim of this project is to develop diamond-based solar thermionic devices, which use sunlight to get surfaces sufficiently hot that they emit electrons directly into a vacuum. If these electrons are collected at a cooled anode, electrical energy can be produced with maximum efficiencies predicted to be much higher than is achievable using conventional silicon solar cells. Martin Cryan, Professor of Applied Electromagnetics and Photonics in the Department of Electrical and Electronic Engineering, said: "Integrating diamond within metasurfaces is very challenging, and this paper is a first step in that direction using amorphous carbon. The next stage is to carry out high temperature testing on the structures and to attempt to reach the ~700 degrees celsius required to obtain efficient thermionic emission."